First Vivienne has her manicure. 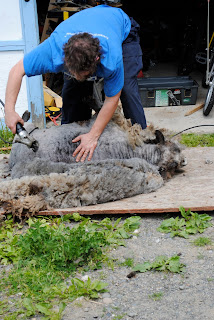 Then she has her haircut. 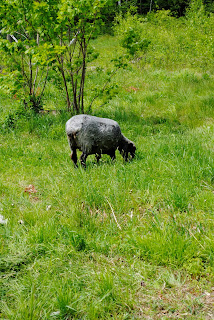 Then she has a little green snack. Great day at the spa;) 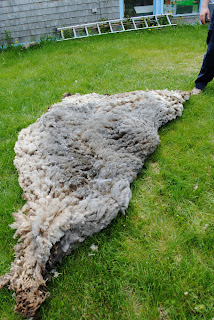 Her fleece, oh gorgeous wool!
Her fleece weighs about 4 pounds. We skirt it; which is picking out as much veggie matter, dried bits of poop and second cuts. Second cuts are places where the shearer lifts the blade mid blow and creates a second cut. Mark has been shearing for about 3 years now and does not have many second cuts. But after doing it for a while it really helps to have cooperative sheep. If they are nervous around the shears they has twitch and wiggle causing the shearer to readjust.
Right now I have about 40 pounds of fleece to have processed. I am going to take the fleece from the Romney/Corriedales to a mill and have their fleece washed and carded. The rams fleece I will wash and card myself and use for felting and stuffing. The rams fleece has smelly boy sheep smell to it but is still useful.
Posted by Fleecenik Farm at Sunday, May 23, 2010

Emily attends an art class and last weeks class was making homemade loofas with a bar of soap and wool that they felted after wrapped around the soap!

Oh think of all the things you can knit with that wool. :)

That dude shearing is one good looking specimen of manhood, isn't he?

Oh so beautiful Karin! I love that color and it looks like super fine wool! What a good job your man does shearing!

Fleecenik Farm
I am re-designing my life. I believe in living a simple life for my kids, for my soul and for the earth. No longer married I venture forth in my homesteading journey on my own. The adventure is beginning a new.